For iPad and Mac on iTunes

Your review and Likes would be much appreciated 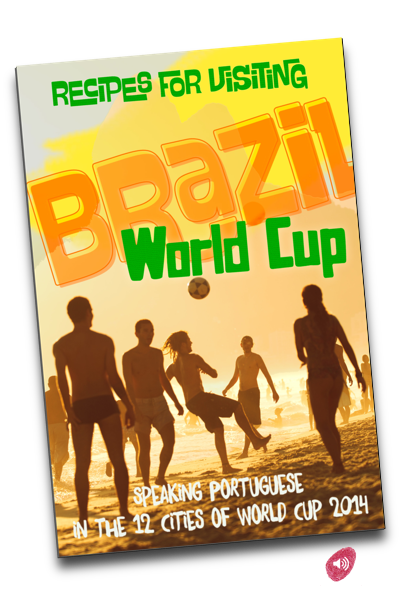 Have you chosen where in Brazil you are going for the World Cup?

Each of the hosting cities are unique and a very different experience from what you are used to.

From North to South, you'll experience different landscapes, weather, food, and music. Only one thing remains the same: The passion for football.

What to pack for Brazil?

If you’re heading to Brazil this summer, you may be wondering what items to bring in your suitcase. Some cities are by the beach, while others are inland. Some are also more cosmopolitan than others, therefore it would be good to get a sense of what to pack. Brazilians are very casual when it comes to style. They like their "chinelo no pé” (foot on flip-flop) style. There’s no need to bring expensive belongings like jewellery or designer clothes. It is also better to leave your collar shirt behind as not many people wear them, unless they’re working.

What foods and drinks are popular in Brazil?

Brazilian cuisine varies greatly according to the region. In the north of Brazil, seafood and fish stews are very popular, whereas in the South, meat is by far the most popular dish. The south region of Brazil is famously known for  its steakhouses and "Gaúchos" (cowboys).

Brazilian food is generally not spicy but well seasoned. Garlic, onions and salt are the main ingredients in Brazilian cooking. If you’re visiting Brazil and are not sure about what to order, here’s a list of traditional dishes that you must try.

10 language and culture tips you’ll learn on this book

•Brazilians don’t speak Spanish. Despite being surrounded by Spanish-speaking countries, Brazilians don’t speak Spanish. It is fairly hard to find a radio station in Brazil where they play Spanish music. Forget about listening to salsa or other Latin rhythms. In Brazil, everyone speaks Portuguese and not many people will be fluent in other languages.

•Ordering in a restaurant can be a bit of a challenge in Brazil. You can get the server’s attention by just saying “oi”.

•When ordering a Brazilian style beer (ice cold) you can ask for a “bem gelada” which literally translates as very cold.

•The word for snack bar in Portuguese is “lanchonete”. These are relaxed  places where you can get sandwiches, fruit juices and pastries.

•The ão sound is very common in Portuguese. It is a very nasal sound, therefore it requires a bit of practice. You’ll hear it in words like “feijão” (beans) and São Paulo.

•The word for party is “balada”. Brazilians never say no to a “balada” and there will be many for the World Cup.

•“Pastel” means cake in Spanish but in Portuguese a “pastel” is a deep-fried pastry filled with many different types of ingredients like cheese, beef or ham. It is one of the most popular snacks in Brazil.

•the word for ATM is "caixa eletrônico”. If you want to withdraw money, you have to look for an ATM that says “saques”.

•In Brazil “Botecos” are very relaxed neighbourhood bars with lively music and atmosphere. They are very different from lounge bars. A “boteco” usually has yellow plastic chairs and tables and people of all ages sit outside chatting while drinking their “cachaça” or beer.

For more and how to pronounce your new words head over to iTunes and get the book.

How to stay safe in Brazil?

The 12 World-Cup Cities of Brazil

Like us you probably prefer to buy books with interesting reviews. So please help us by adding one.

If you have already had a look at the book and know what you would like to say, jump to the review link below. 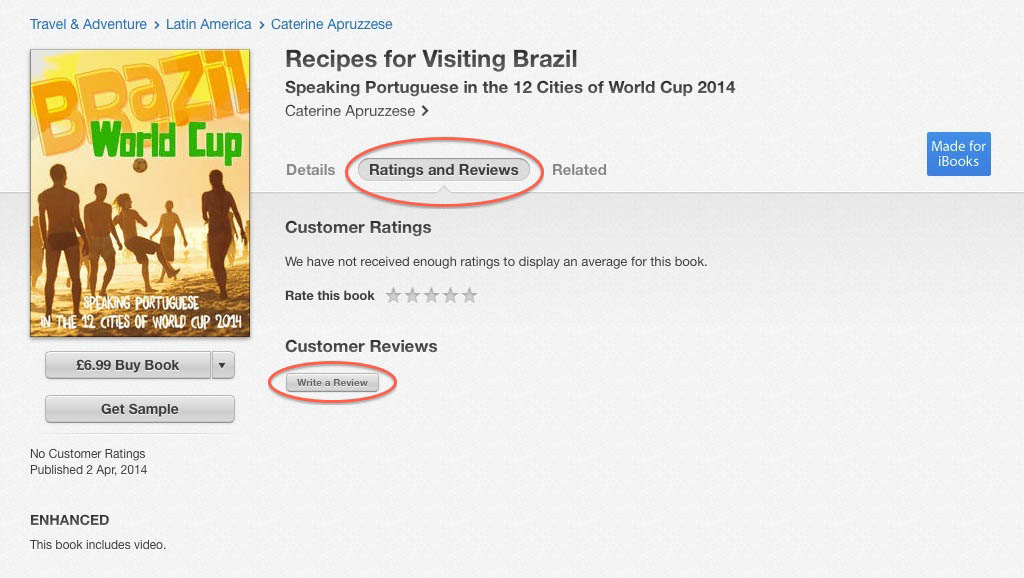 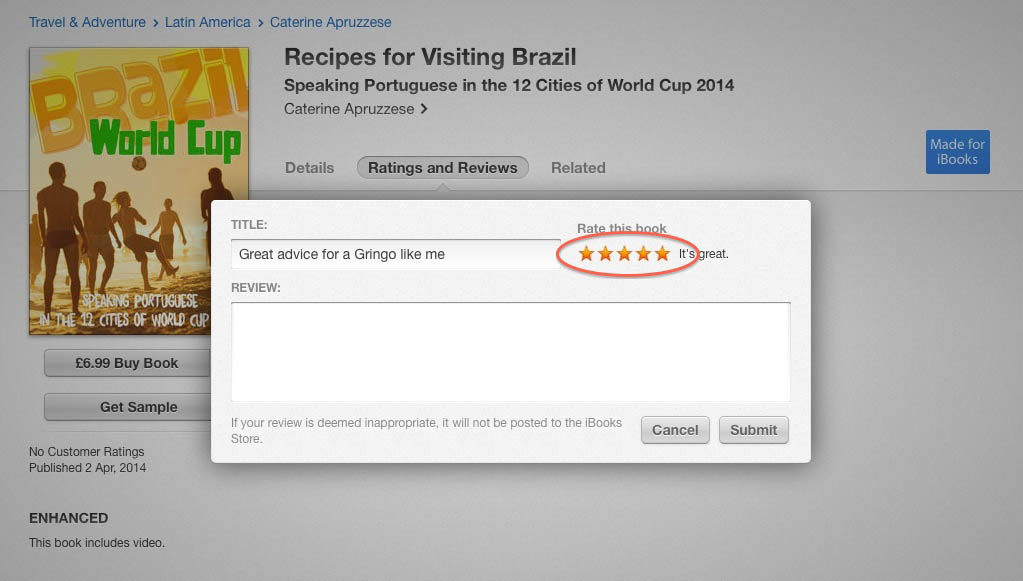 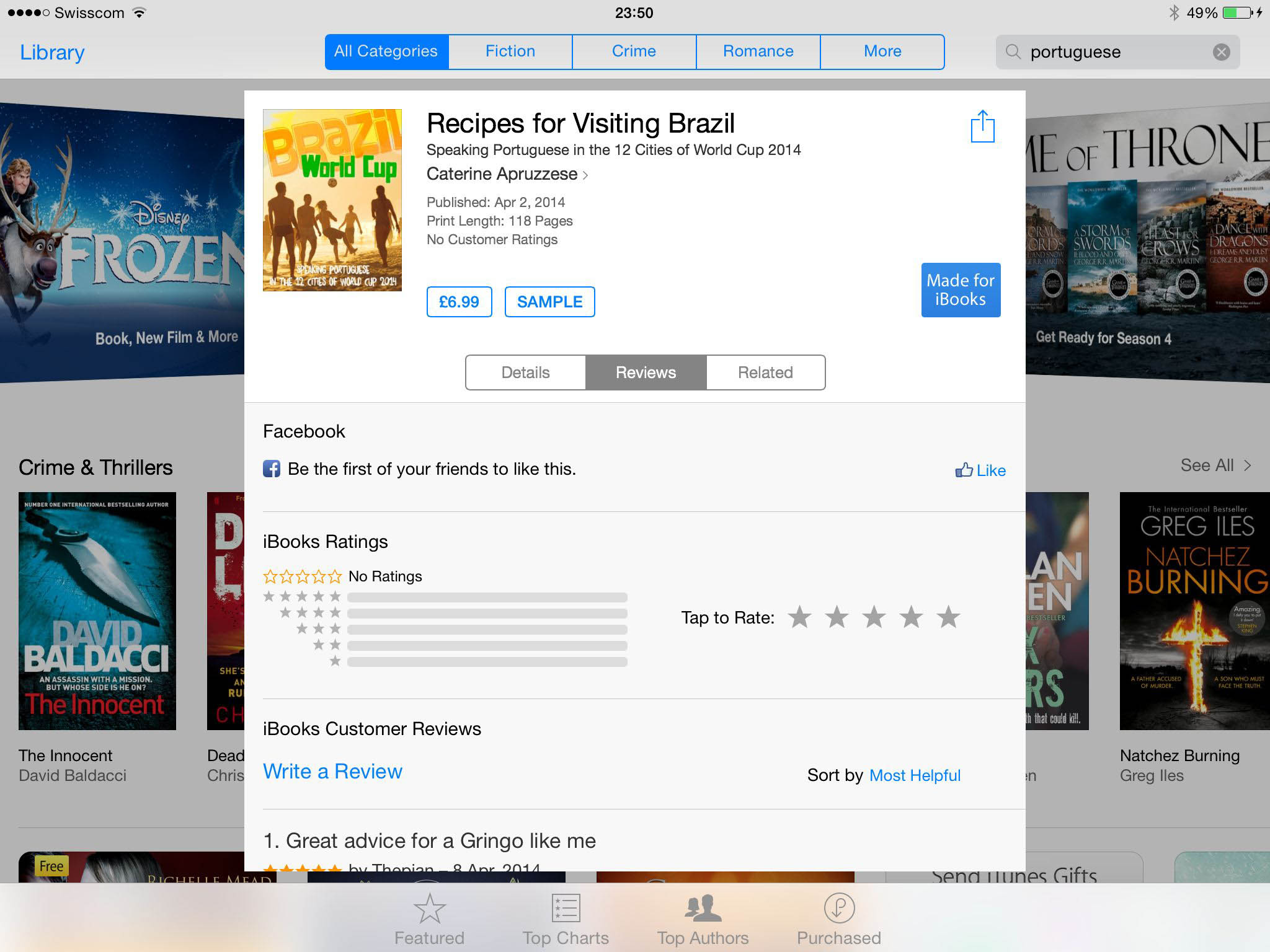 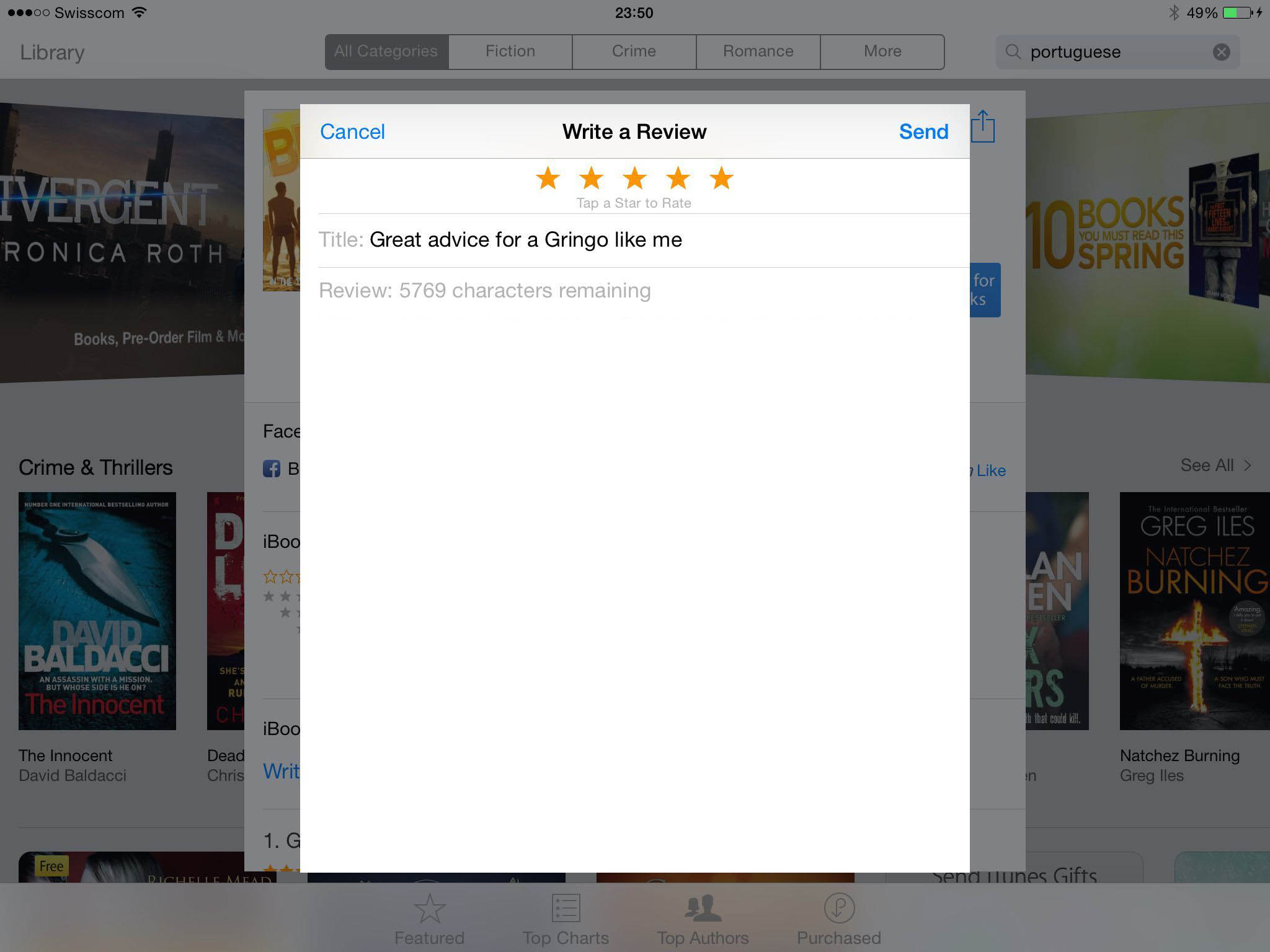 Take care top spot if the nickname is already used, your review will not be submitted until you change the nickname.